There were Asian food, Asian films, Asian culture and a whole lotta Asian peeps at the 20th San Diego Asian Film Festival. It was overall an interesting experience to have seen films directed by and starring Asian women that are not about or focused on, romance as the endgame but instead, it’s about self: self-discovery, self-love, and self-acceptance. Ever grateful to SDAFF 2019 for sending a strong message to Asian women and Asian American women everywhere for featuring stories of women with their own sense of self independent of another. 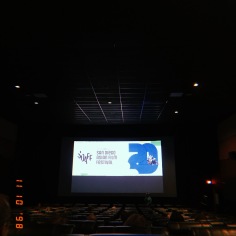 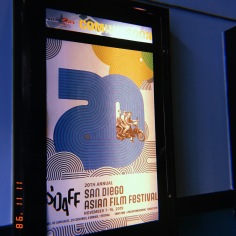 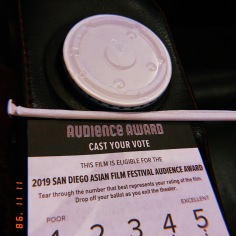 Grandma did not come here to play, but she did come to win.

What’s one chain-smoking, shot-drinking, and heavy-gambler of a grandma with enough swagger got to do with your local gangs?

Tsai Chin (The Joy Luck Club, Abominable) stars in this dark comedy about an elderly grieving widow who embarks on a wild adventure. It’s a dramatic tale about grief, aging and making human connections and this one lucky grandma is doing so on her own terms.

“Everyone expects me to the same person before I left,” is a sentiment that rings true to a specific breed of people: The lost souls. The ones with multiple homes, but who are also never home at all. The perpetual wanderers – not so much by choice – but by design.

Director Andrea A. Walter (also the film’s cinematographer and writer) is, much like the lead character, half Filipina and half British. It’s almost an autobiography about loss and disconnect presented in a haze of indie music video-like aesthetic.

It’s Joy Luck but for dads…sort of.

Starring Hong Kong icon slash “Cantopop Queen”, Sammi Cheng as Acacia Ha, who thought she was an only child, until her father’s passing. As it turns out, she’s actually the eldest out of three sisters.

The younger sisters played by Megan Lai as Branch and Xiaofeng Li as Cherry take a while to warm up to each other and Acacia.

Their shared mission then becomes to save their dad’s restaurant. And it seems symbolic enough that their sisterly bond is almost dependent on solving the missing puzzle of their late dad’s signature recipe.

How Much is The ‘American Dream’ Worth?

It’s hard enough to even dub it that or make a comparison…but like Thelma and Louise? But Make it Sad…Sadder. The Saddest.

Lead actress Geetanjali Thapa is captivating on-screen. You will find yourself rooting for her no matter what she does. She’s got you hooked.

Helmed by two women, Sonejuhi Sinha and Charlotte Rabate with Sinha on the director’s chair as well as writer, they present the grim reality of the American Dream in this day and age.

You want to root for both the leads and you can’t stop watching what they’ll do next, but at the same time, you want them to just…Stop.

SEND ME TO THE CLOUDS

“Life and death are ruled by love and desire”

“We struggle so hard in life all for the sake of a good ending.” How powerful and poetic is that?

A young journalist discovers she has ovarian cancer throwing her life off course. Her “existential journey” is riddled with anger and heartbreak and it’s also about coming home to one’s self. Lead actress Chen Yao represents the voice of a generation lost (and one that we don’t talk about often as a global society).

It’s not your average Chinese film, as director,  Teng Congcong said. At its core, Send Me to The Clouds is a powerful, rebellious film about the repercussions of China’s One-Child Policy.

Hailed as the first film to ever be directed by a trans woman starring a trans woman, Isabel Sandoval’s premiere film raises awareness on the most important issues to surround trans lives today.

It would be perfectly impossible for a cisgender actress to have played this role, let alone write it with the lens-specific to that of the trans experience.

It’s a powerful film with a strong social equality message that is in all ways intersectional: she’s Asian – specifically Filipino and she’s an undocumented immigrant. Sandoval’s Olivia is a carefully crafted character who is brave and courageous not because of who she is, but because regardless of who she is and the challenges are thrown her way, she’s able to persevere.

This is not a love story.

There’s magical realism, a dash of romance or two, but don’t be fooled…this is no romantic flick.

In an ending that didn’t please the elderly men at my showing…and to think they almost rooted for the main character until then. The elderly women, however, mostly Pinays – they understood the underlying message: Love yourself first.

It was a treat to watch a whole Tagalog film, as is, Stateside. It’s reminiscent of the children’s shows about magic in our every day lives. With ULAN(which means rain), the magic just maybe, in making peace with your self.

In a film that’s hailed “ahead of its time” when it first came out in 2004 and it still is considered as such even in 2019 on its 15th anniversary. It’s widely known for breaking through multiple barriers of cultural and generational divides with its intersection of race and sexuality. It’s even considered as one of the main cornerstones of Asian American cinema and the LA Times agrees.

This is A) good in that its legend status is still A+, but also B) kind of sad that we haven’t seen anything much like it (or anywhere near it) since then.

It’s a film that’s almost impossible to put into words because both of the main characters’ identities alone are so complex. It’s just something you have to watch for yourself and experience. Check it out here with IMDb TV.

For a special Q+A with stars Michelle Krusiec (Will Peng) and Lynn Chen (Vivian Shing), here is asienne’s EXCLUSIVE look at Saving Face:

Here is the IMDb link. Written and directed by Jeannie Nguyen. Co-starring Jenny Yang as Christine. Oh, and if you’re really interested…just for laughs, here’s the full link to the short (click if you dare)… 😀

Which of these movies have you seen and which are you excited to see?