Does being Asian truly rock? A new YouTube web series is here to answer that question for you. In a brand new 13-episodal short and sweet narrative is a two to three-minute web series called Asian Rocks that is your newest obsession…er something new to binge-watch while you’re waiting on the subway (NYC), or the Metro (LA).

asienne caught up with the founder and producer of Asian Rocks, Wizeman Khensu in this candid interview.

A: What is the concept behind Asian Rocks?

WK: The concept behind Asian Rocks…I gotta say the whole reason for this show is I moved New York three years ago and I moved here with a trash bag and a dream–trying to go after my film dream.

And the first person that I met–I’ve only been living in the city for three days–was Jane Park.

WK: I met her after a free [entertainment industry] event on Craigslist. I was so excited it was my third day in New York, I was making friends at the event….and then I left. I was so excited that I forgot how to get back to the train. So, I’m literally looking around and Jane walks up to me and she said, “You look lost” and I said, “Yeah I forgot how to get to the train.“

I told her my story, how I had no friends, how I’ve never even been here before and how I’m from a small town in Georgia. We just started talking.

She gave me her number and said: “Since you don’t know anybody, call if you need anything.“

That was our initial meeting. She was the first person that I made friends with.

She was saying how she really wants to be a professional actress but she’s only getting supporting roles for auditions, you know? The friend, the secretary, the tourist…

She asked, “How can I ever get a leading role when I only have small auditions?“

At that point, I remember telling her, “Look, Jane, you have a really good story. Instead of us just talking about what you’re going through…how about we write a story about your life and you star in it? And we show the world how good of an actress you are and if it’s good, Hollywood will come to us.“

Right there and then we started putting the story together based on her life. The story came from us coming together and her telling me about her life after venting about what’s going on and me writing this stuff down. We developed a story about her life and added some comedic humor to it.

Asian Rocks is pretty much 70% of her real life and 30% of the stuff we have to make up and make it funny so [the viewers] can understand what it’s like being Asian in New York City or anywhere in America.

So that’s the back story of how it got started.

A: How did the show’s name come about?

WK: After we talked about doing a story about her life and all the ups and the downs that she goes through, I said, “How about we name this story, Asian Rocks?”

She said, “Why? Sometimes it doesn’t rock. Being Asian.”

I said, “You know what? It’s a metaphor for whatever you want it to believe.”

So, on every episode that became our saying, “Being Asian Rocks.”

Then I said to her, “No matter what’s going on in that episode, the audience is going to look forward to you saying that. And when you say that, the audience gets to interpret how they feel about what you’re saying.”

Is it being said as a good thing, or a bad thing? Let’s leave it to the audience’s interpretation.

The show is called Asian Rocks because you can promote being Asian but at the same time giving it a [dose of] realism…giving people both sides of it. Then you let them make a decision of what it’s about by just telling her story.

A: Can you talk a little bit more about the writing process since you said it’s based on her life? Is it mostly an outline? Or improv?

WK: So, when Jane sat me down and we talked about her entire life, I wrote an outline on that: what parts she wants to show. and what she thought was interesting. Once she agreed on it that’s when I went in and wrote the script for her.

It started off with just five and when she saw it, she loved it so much she asked if I could write more.

We made it short and sweet for millennials and straight to the point. No script was more than three pages.

The show is for Asian Americans between ages 18 and 30.

Anybody can watch this show, but that’s our target audience.

Because we knew millennials have short attention spans–especially when you’re unknown and you don’t have a big name attached–you’ll only be given a certain amount of time–so that’s why every episode is only between two and three minutes.

A: Did Jane also take part in writing the script?

WK: This project came together with our combined talents. She went through the 13 episodes and changed some of the dialogue to make it more authentic because me, I’m African. So I cannot completely state the Asian experience. I wrote it to the best of my ability and she went in and told me to change some things that would make it more relatable to the Asian community.

A: And you’re still in production, right?

WK: Yes, from a year ago with [the show] being thought to actually getting all 13 episodes done. 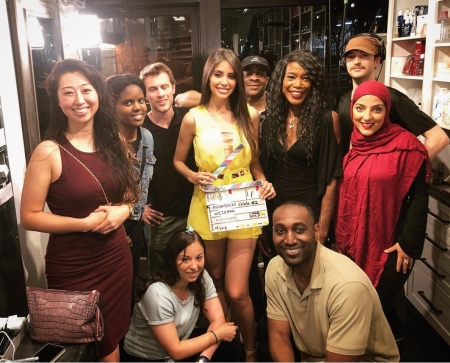 A: How many people make up your team?

WK: We have eight consistent people. They’re the ones in all the episodes. We have day players too. We have a very diverse crew.

A: How did you build your team?

WK: Neither one of us are rich. So, I posted an ad on Craigslist about how I’m producing a web series and I’m looking for a crew from cameraman to all these positions. Within about a day, I got a hundred emails. I called all of them and I wanted to see who was on the same wavelength. I was also honest about not having money and how they’d probably have to do it for free and if they’re OK with that.

I was very blessed to be working on this project with people who own their own equipment because Jane and I don’t own anything.

A: What about the funding?

I’m a server, she’s a bartender and we pretty much funded the rest of this project completely on our own without no outside investment.

I’m not going to lie it’s been a lot of nights where I’ve only eaten strawberries for dinner because I do have to pay my cameraman the next day. I couldn’t even afford to eat.

Jane and I both made a lot of sacrifices financially where we were damn near broke trying to film this.

But at the end of the day, guess what? We got it done. It’s a lovely show. And I’m ready for the world to see it.

This interview was condensed for time.